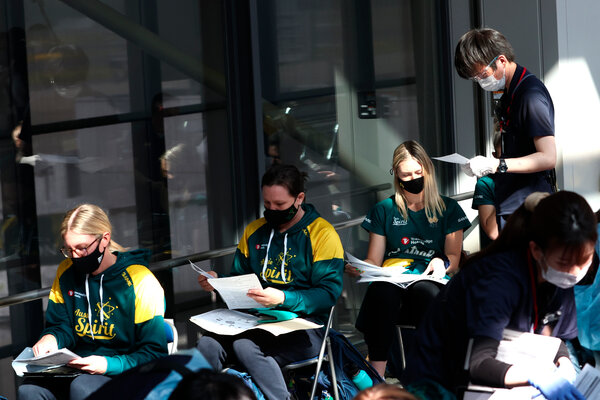 Covid hospitalizations are rare among children, but still more frequent than for the flu, the C.D.C. says.

A safe return to U.S. schools seems closer with vaccines and testing improvements.

After a year’s delay, the opening ceremony for the Tokyo Summer Olympics will take place next month.

At least, that’s the plan.

The Olympic organizers have come under increasing pressure from public health officials, local medical groups and prominent business leaders who oppose holding the Games during a pandemic. A recent national survey found that 83 percent of the Japanese public said they did not want their country to host these Olympics.

For more insight into Tokyo 2020 (yes, it’s still called that), I spoke to Andrew Keh, a sports reporter covering the Olympics.

Will the Olympics take place, or is there a chance they’ll be canceled or pushed off again?

That’s literally the question that every single person is asking. And the question I ask myself. And it’s what my wife wants to know. [Laughs.] But yeah, I’m saying yes, on July 23 we’re going to be watching an opening ceremony. The clues are all pointing in that direction. A couple of weeks ago, the International Olympic Committee declared themselves to be in what they called “operational delivery mode,” which is marketing speak but means this is going forward. And recently, an I.O.C. member said that the Olympics would be on “barring Armageddon.” It feels like for the I.O.C., and for Tokyo, there’s too much at stake for them to cancel.

Why is Japan putting on the Games when large swaths of Japanese society are against it?

It’s a complicated question, but simply put, there’s the feeling that this is too big a ship to turn around. The official budget figure for the Games is $15 billion, so a ton of money has already been poured into it. The official tally said that moving the Games last year cost $3 billion. The I.O.C., meanwhile, gets most of their income from broadcast rights, and they don’t get that money until the Games go on.

Japan is currently in what they call the fourth wave of infections. Tokyo and a number of other major cities have been in a state of emergency since April, and that has been extended to June 20. It’s important to note that the percent of the population that is fully vaccinated there is still pretty minuscule, at around 3 percent. But the vaccination effort is picking up steam, and cases in the past few weeks have slowed down from their peak earlier this spring.

How are the organizers planning to keep people safe?

They barred international fans. It also looks as if there’s going to be daily testing. And everybody involved is going to be discouraged from going anywhere besides their lodgings. So that means no public transportation, no eating in restaurants, no sightseeing. They’re very much trying to enforce what they would call a bubble.

The biggest tension point has probably been that vaccinations are not mandatory for participation. But the I.O.C. has procured donations from the Chinese government and Pfizer for any athletes who are struggling to get vaccinated in their home countries.

What do the athletes say?

There are more than 10,000 athletes, so it’s hard to encompass all of their views into one position. But if I were to do that, I think they want to be there. For a lot of these people, this is kind of their one chance to be on the big stage, to get exposure, to pick up sponsorships and to raise their profile. And on a more symbolic level, they want to be able to compete at the highest level, which is what a lot of these athletes have arranged their entire lives toward doing.

The end of pandemic tipping?

The pandemic turned New Yorkers into big tippers, particularly in the first months of the shutdown. But as the city reopens, average tipping on takeout, delivery and other restaurant meals is slowly returning toward prepandemic levels, according to data from millions of credit card transactions starting in mid-March 2020.

The initial increase at the beginning of the pandemic is consistent with what we know about why people tip in the first place. Research shows we tip to show gratitude (a reason that might have loomed large during the worst of the pandemic); to meet social norms; to reward good service; to impress other people; to avoid guilt.

The logic for the increase makes sense in the other direction: If the tip increases were a form of hazard pay, there could be a decrease if the hazards of being a service worker are perceived to be lower now.

No hot vax summer? The latest jobs report was positive, with employers adding 559,000 jobs in May. But the new data also suggest that a supercharged reopening spurred on by vaccination is harder than it once seemed.

Dr. Anthony Fauci told CNN that he was cautiously optimistic that children under 12 in the U.S. will be able to get the vaccine before Thanksgiving.

See how the vaccine rollout is going in your county and state.

What else we’re following

Taiwan’s hospitals are being stretched to their limits as case counts rise.

Vietnam asked its people for cash to help fight the virus — and they delivered.

Certain strains of the flu may have been driven to extinction because of precautions taken during the pandemic, Helen Branswell of Stat News tells NPR.

Some scientists are warning that the root cause of pandemics — the destruction of nature — is being ignored, The Guardian reports.

The New Yorker wrote about one of the unexpected charms of the pandemic: the proliferation of gray “Covid hair.”

I am a long hauler so I’ve been struggling to get back to health for the past 15 months. It’s hard to see people celebrating and returning to normal as I don’t know when or if I will be normal. It feels like there are those of us directly affected by the virus, and those who have made it through relatively unscathed.

Let us know how you’re dealing with the pandemic. Send us a response here, and we may feature it in an upcoming newsletter.

Sign up here to get the briefing by email.

Email your thoughts to [email protected]