Will the U.S. meet Biden’s deadline?

By Jonathan Wolfe and Amelia Nierenberg 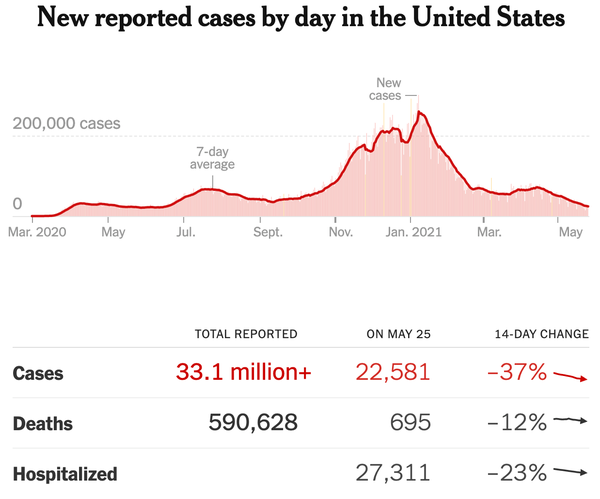 The White House outlined a plan for how the U.S. would distribute an initial 25 million vaccine doses around the world.

U.S. nursing home deaths have fallen sharply as older Americans have been vaccinated.

President Biden is promising Americans that a return to normal will be within reach if 70 percent of adults get at least one dose of the Covid vaccine by July 4. But with one month remaining before his deadline, how close is the U.S. to reaching the president’s goal?

Close, but not quite there.

According to a New York Times analysis, if the current rate of vaccination holds, the nation will ultimately fall just short of the objective, with roughly 68 percent of adults partly vaccinated.

Substantially boosting the vaccination rate is a daunting task: As more people become inoculated, the pool of the most willing adults is shrinking. To nudge the nation toward his target, the president yesterday laid out an aggressive campaign that includes incentives from Super Bowl tickets to free beer.

Vaccinating 70 percent of the population by Independence Day would have seemed like phenomenal progress at the beginning of the year, when the vaccine rollout was moving at a glacial pace. And as of yesterday, about 63 percent of adults had received at least one shot.

While 12 states, including California and Maryland, have already passed the 70 percent mark, 30 states will probably not reach the national target. In Wyoming and Tennessee, for example, projections show that the rate is unlikely to reach much higher than 50 percent by early July.

Vaccinations have leveled off in many states in the Deep South and Mountain West because of limited access and shot hesitancy. A few states, like Alabama and Mississippi, have fallen far behind and are unlikely to reach 70 percent before spring 2022.

Even statewide numbers can hide local problems. In some parishes in Louisiana, for example, less than 20 percent of people have received a first dose.