WASHINGTON — If the sweeping voting rights bill that the House passed in March overcomes substantial hurdles in the Senate to become law, it would reshape American elections and represent a triumph for Democrats eager to combat the wave of election restrictions moving through Republican-controlled state legislatures.

But passage of the bill, known as H.R. 1, would end a legislative fight and start a legal war that could dwarf the court challenges aimed at the Affordable Care Act over the past decade.

“I have no doubt that if H.R. 1 passes, we’re going to have a dozen major Supreme Court cases on different pieces of it,” said Nicholas Stephanopoulos, a law professor at Harvard.

The potential for the bill to set off a sprawling constitutional battle is largely a function of its ambitions. It would end felon disenfranchisement, require independent commissions to draw congressional districts, establish public financing for congressional candidates, order presidential candidates to disclose their tax returns, address dark money in political advertising and restructure the Federal Election Commission.

The bill’s opponents say that it is, in the words of an editorial in The National Review, “a frontal assault on the Constitution” and “the most comprehensively unconstitutional bill in modern American history.”

More measured critics take issue with specific provisions even as they acknowledge that the very nature of the bill — a grab bag of largely unrelated measures — would make it difficult to attack in a systematic way. In that respect, the anticipated challenges differ from those aimed at the Affordable Care Act, some of which sought to destroy the entire law.

John O. McGinnis, a law professor at Northwestern University, said the bill went too far, partly because it was first proposed as an aspirational document rather than a practical one in 2019, when Republicans controlled the Senate and it had no hope of becoming law.

“It seems very willing to brush past, at least in some cases, some relatively clear constitutional provisions,” he said, citing parts of the bill that require presidential candidates to disclose their tax returns and force advocacy groups to disclose their contributors.

In March, 20 Republican state attorneys general said they were ready to litigate. “Should the act become law,” they wrote in a letter to congressional leaders, “we will seek legal remedies to protect the Constitution, the sovereignty of all states, our elections and the rights of our citizens.”

Representative John Sarbanes, Democrat of Maryland and one of the lead authors of the package, said drafters had written it with a fusillade of Republican legal challenges in mind and were confident that it would “survive the great majority of them” in the Supreme Court.

“I’m extremely comfortable that we built this to last,” Mr. Sarbanes said. “We think that the components are ones that are well girded against constitutional challenge — even by a court that we can imagine will probably start from a place of favorability to some of these challenges.”

Democrats have made the bill a top legislative priority. But with Republicans united in opposition in the Senate, its path forward is rocky.

Before a key committee vote this month, proponents of the overhaul are expected to introduce a slew of technical changes meant to address concerns raised by state elections administrators. But pushing it through the full chamber and to President Biden’s desk would require all 50 Senate Democrats to agree to suspend the filibuster rule and pass it on a simple party-line vote, a maneuver that at least two Democrats have so far rejected. 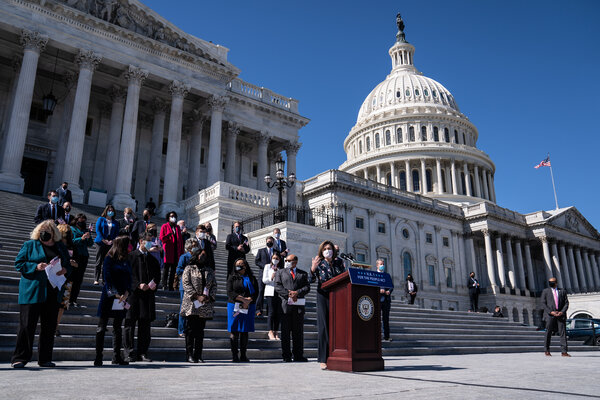 Some scholars have urged congressional Democrats to concentrate their efforts on narrower legislation, notably the John Lewis Voting Rights Advancement Act, which seeks to restore a key provision of the Voting Rights Act that the Supreme Court effectively eliminated by a 5-to-4 vote in 2013 in Shelby County v. Holder.

The provision, the law’s Section 5, required states with a history of discrimination to obtain federal approval before changing voting procedures. In the Shelby County decision, the court ruled that the formula for deciding which states were covered violated the Constitution because it was based on outdated data.

“Congress — if it is to divide the states — must identify those jurisdictions to be singled out on a basis that makes sense in light of current conditions,” Chief Justice John G. Roberts Jr. wrote for the majority.

The John Lewis Voting Rights Advancement Act, named for the civil rights leader who served in the House for more than three decades until his death last year, responds to that invitation by updating the coverage formula. Whether the Supreme Court — which has become more conservative since 2013 — would uphold the new formula and allow Section 5 to be restored is an open question, but the Shelby County decision at least allows Congress to try.

Similarly, the court’s precedents suggest that not all of the anticipated challenges to the much broader H.R. 1 would succeed.

As a general matter, few doubt that Congress has broad authority to regulate congressional elections because of the elections clause of the Constitution.

To be sure, the clause specifies that “the times, places and manner of holding elections for senators and representatives shall be prescribed in each state by the legislature thereof.”

The clause’s next phrase, though, allows federal lawmakers to override most of the power granted to state legislatures: “But the Congress may at any time by law make or alter such regulations, except as to the places of choosing senators.”

The elections clause, supplemented by other constitutional provisions, Professor Stephanopoulos wrote in an article to be published in the journal Constitutional Commentary, means that “even the bill’s most controversial elements lie within Congress’s electoral authority, and Congress could actually reach considerably further, if it were so inclined.”

But he acknowledged that there was controversy over the sweep of the provision. In a majority opinion in 2013, Justice Antonin Scalia wrote in an aside that the clause “empowers Congress to regulate how federal elections are held, but not who may vote in them.” That statement was in tension with the controlling opinion in a 1970 decision that allowed Congress to lower the minimum voting age in congressional elections to 18 from 21.

If the statement from Justice Scalia is followed, it would raise questions about language in H.R. 1 that seeks to restore voting rights to people with felony convictions who have completed their sentences in states that would otherwise disenfranchise them.

Several scholars said the provision might be vulnerable to a legal challenge. “That’s probably the most obvious red flag,” said Franita Tolson, a law professor at the University of Southern California.

The Constitution grants Congress considerably less authority over presidential elections than congressional ones, allowing it to set only the timing. But some Supreme Court opinions have said the two kinds of authority are comparable.

The bill’s requirement that states create independent commissions to draw congressional districts could also lead to litigation. Such commissions were upheld by a 5-to-4 vote in 2015 in Arizona State Legislature v. Arizona Independent Redistricting Commission.

Justice Ruth Bader Ginsburg, writing for the majority, said Arizona voters were entitled “to address the problem of partisan gerrymandering — the drawing of legislative district lines to subordinate adherents of one political party and entrench a rival party in power.”

With changes in the makeup of the Supreme Court since then, the Arizona precedent might be vulnerable, said Travis Crum, a law professor at Washington University in St. Louis.

“In litigation over the 2020 election, several justices — including Justice Brett Kavanaugh — questioned the validity of that precedent,” Professor Crum said. “Given the possibility that the court might overturn that decision in the near future, it is even more imperative that Congress step in and mandate the use of independent redistricting commissions for congressional districts.”

In dissent in the Arizona case, Chief Justice Roberts wrote that the Constitution specified that only state legislatures had the power to draw congressional maps. Four years later, though, writing for the majority in rejecting a role for federal courts in addressing partisan gerrymandering, he wrote about independent commissions created by ballot measures with seeming approval and said Congress also had a role to play, citing an earlier version of H.R. 1.

The provision in H.R. 1 establishing a public financing system appears to be consistent with current Supreme Court precedents

In 2011, by a 5-to-4 vote, the court struck down a different Arizona law, which provided escalating matching funds to participating candidates based on their opponents’ spending. But Chief Justice Roberts, writing for the majority in the case, Arizona Free Enterprise Club v. Bennett, indicated that more routine public financing systems remained a valid constitutional option.

“We do not today call into question the wisdom of public financing as a means of funding political candidacy,” Chief Justice Roberts wrote. “That is not our business.”

Some of the disclosure requirements in H.R. 1 have drawn objections from across the ideological spectrum. The American Civil Liberties Union has said that it supports disclosures tied to “express advocacy” of a candidate’s election or defeat. The bill goes further, though, requiring disclosures in connection with policy debates that refer to candidates.

That measure, two A.C.L.U. lawyers wrote in The Washington Post in March, “could directly interfere with the ability of many to engage in political speech about causes that they care about and that impact their lives by imposing new and onerous disclosure requirements on nonprofits committed to advancing those causes.”

“When a group is advocating policy changes outside the mainstream,” they continued, “they need privacy protections to be able to speak freely and without fear of reprisal.”

The Citizens United decision in 2010 upheld the disclosure requirements before it by an 8-to-1 vote, but a pending Supreme Court case, American for Prosperity v. Bonta, might alter the constitutional calculus.

Professor McGinnis said he also questioned a provision in the bill that required leaders of organizations to say they stood by the messages in political advertisements. “This seems to me to be eating up airtime without any real justification and subjecting people to harassment,” he said.

He also took issue with the bill’s requirement that presidential candidates disclose their tax returns, saying Congress cannot add qualifications to who can run for president beyond those set out in the Constitution: that candidates be natural-born citizens, residents for 14 years and at least 35 years old.

A 1995 Supreme Court decision rejecting an attempt by Arkansas to impose term limits on its congressional representatives appears to support the view that lawmakers cannot alter the constitutional requirements.

Even if every one of the objections to the bill discussed in this article were to prevail in court, most of the law would survive. “Part of why the attack on H.R. 1 is unlikely to be successful in the end is that the law is not a single coherent structure the way Obamacare was,” Professor Stephanopoulos said. “It’s a hundred different proposals, all packaged together.”

“The Roberts court would dislike on policy grounds almost the entire law,” he added. “But I think even this court would end up upholding most — big, big swaths — of the law. It would still leave the most important election bill in American history intact even after the court took its pound of flesh.”