(Here’s the sign-up, if you don’t already get California Today by email.)

You’ve probably seen at least a few “exit interviews” with outgoing Gov. Jerry Brown over the past several months. And if you’re like me, there’s really never enough. The man is endlessly fascinating and a veritable quote machine (even if you need a translator).

Our Los Angeles bureau chief, Adam Nagourney, recently visited the governor on the tail end of a non-farewell tour before the Gov.-elect Gavin Newsom takes over on Monday. Here, Adam tells us about what it’s like to interview Mr. Brown:

After nearly 50 years in California public life, including 16 years as governor, it’s difficult to think of a question that Jerry Brown has not heard before. And Mr. Brown can be an ornery interview, particularly when asked questions that strike him as obvious or familiar, as we were reminded during the visit to his ranch.

Like, for example, when Mr. Brown was asked if he had any regrets about problems not tackled. Probably not the best question to ask.

Mr. Brown has been famously frugal. The new governor, Gavin Newsom, brings a more liberal view of the world; he’s already moving to spend $1.9 billion in his first budget on preschool programs. The new Legislature will be ruled by a huge Democratic majority.

Does that worry Mr. Brown?

“That pressure, it’s always there,” he said. “Pent-up demand.

Mr. Brown said that the dire economic climate he encountered upon taking office eight years ago — a $26 billion deficit — was almost welcome. “I was also able to say no,” he said. But the governor is leaving a $14 billion surplus to his successor, so one big question now is whether Mr. Newsom will be able to (or want to) say no.

And if the new governor doesn’t say no, Mr. Brown said, California’s famous boom-and-bust economy might do it for him.

“There’s a certain exuberance,” he said. “But the business cycle has a limiting influence. Because the recession probably already has begun.”

(A note: We often link to content on sites that limit access for nonsubscribers. We appreciate your reading Times stories, but we’d also encourage you to support local news if you can.) 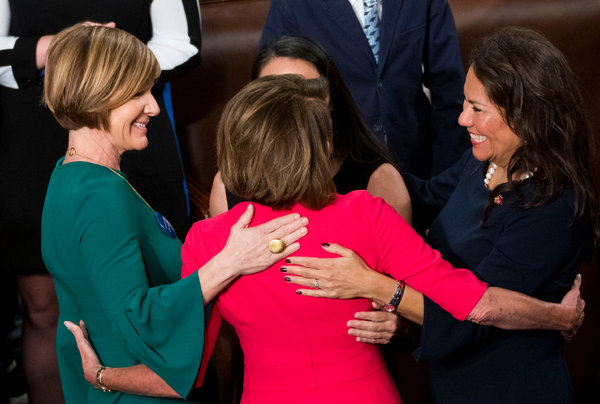 • Representative Nancy Pelosi once again assumed control of the House of Representatives on Thursday, the first day of a reordered government, with a diverse group of young Democrats in the House majority. [The New York Times]

• “Drive engorged or dry out.” That’s what a woman who worked for the Bay Area bus operator AC Transit said she was told by older colleagues when she complained that she had to pump breast milk in a conference room. She faced problems common among breast-feeding women working in male-dominated workplaces: Nowhere to pump and no employer support. [The New York Times]

• A Navy SEAL accused of shooting indiscriminately at civilians and killing a teenage Islamic State fighter with a handmade custom blade is set to be arraigned today at Naval Base San Diego. He has denied the allegations. [Navy Times]

• You can now download ShakeAlertLA, a long-awaited earthquake early warning app for L.A. It won’t be perfect — there may be some false alarms — but it can help in the event of a damaging quake, residents of other places that have similar systems have said. [The Los Angeles Times]

• A startling statistic: Around $2.5 billion of legal cannabis was sold in California last year — which is half a billion dollars less than in 2017, when only medical marijuana was legal. Here’s why. [The New York Times]

• Correctional officers have still been showing up for work at the federal prison in Mendota. They’re just not getting paid, which has been tough on employees, many of whom live paycheck to paycheck working a job in which they risk their lives. [The Fresno Bee]

• Here’s more about how the shutdown is affecting thousands of federal employees across the country, including many in California. [The New York Times]

• The San Francisco Giants are spending $10 million on a monster scoreboard at AT&T Park. It’ll be the third largest in the majors when it’s done and the biggest at any California sports venue. Look out, Jerry Jones (sort of.) [The San Francisco Chronicle]

• Gavin Newsom is hosting a pre-inauguration concert on Sunday to benefit communities harmed by wildfires and firefighters. Who’s playing? Mr. Worldwide, a.k.a. Pitbull, and Common. [The Sacramento Bee]

We’re back with a weekend recommendation from our food writer, Tejal Rao. And today, she’s got something quintessentially Californian:

How about a nice pizza recipe? Excavated and adapted from the 1995 title, “The California Pizza Kitchen Cookbook” by Larry Flax and Rick Rosenfield, the barbecue chicken pizza is an American classic, regardless of how you feel about mall pizza.

Sure, you’ve had it at the food court, or maybe carried it onto an airplane, but have you ever made it at home with fresh, bubbly dough and barbecue sauce from scratch? I wrote an ode to CPK’s barbecue chicken pizza in this weekend’s magazine, and shared the story of how as a young immigrant to the United States, mall pizza welcomed me in and made me feel at home. You can read it here.

California Today is written by Jill Cowan and edited by Julie Bloom, who grew up in Los Angeles and graduated from U.C. Berkeley.