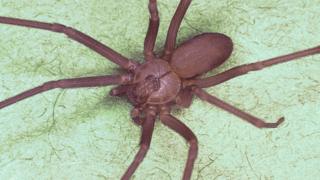 Canadian bureaucrats were sent home twice after employees spotted spiders they could not identify, including one they feared was venomous.

The spiders were noticed in June and in October 2018 and the office evacuated and fumigated both times.

The employees affected by the eight-legged guests work for a federal department in Ottawa, Ontario that provides government tech services.

During the October incident, the suspicious arachnid, which did not immediately appear to be a run-of-the-mill house spider, was caught and sent as a precaution to an entomologist for identification.

There were concerns it was a brown recluse spider.

It was provisionally classified the same day as a common yellow sac spider.

The department says the health and safety of its employees is of the utmost importance.

A spokesman told the BBC that no work time was lost since the bureaucrats were able to work either from home or other offices despite the disruptions.

Brown recluse spider bites are rare, according to entomologists, though its bite can sometimes cause a severe skin lesions that can take months to heal, and some people have a reaction to their venom that can include nausea and vomiting.

The spiders are about the size of a Canadian or US quarter coin and mostly found in south-central parts of the United States.

They are exceedingly scarce in Canada.

In fact, entomologist Catherine Scott told the CBC that there has been fewer than five brown recluse spiders ever found in Canada in the last century.

Ms Scott, along with two colleagues, run a Twitter account called Recluse or Not, with the goal of helping people correctly identify whether the spider they have spotted is indeed a recluse.

The group says the goal of the community-based project is to help enhance people’s knowledge of “one of the world’s most maligned groups of spiders”.