Much of the Bay Area was under a flash flood watch on Sunday, with the National Weather Service warning of the potential for mudslides across the region. 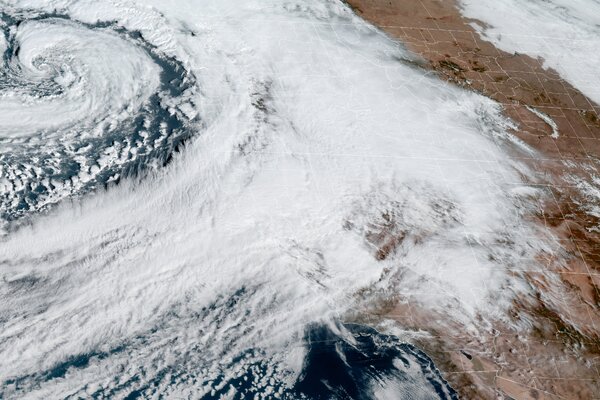 California bore the brunt on Sunday of what meteorologists referred to as a “bomb cyclone” and an “atmospheric river,” a convergence of storms that brought more than half a foot of rain to parts of the Bay Area, along with high winds, concerns about flash floods and the potential for heavy snow in the Sierra Nevada.

The National Weather Service warned that the rainfall could cause mudslides, especially in areas scorched by wildfires.

From Marin County to the area just south of Big Sur along the Pacific Coast, flash flood watches were in effect until late Sunday night and, in some areas, early Monday morning, including parts of the San Francisco peninsula.

The threat of flash floods prompted evacuation orders for parts of San Mateo County, south of San Francisco, where officials warned that downed trees, branches and mudslides could impede efforts to leave.

The convergence of storms comes at a challenging time for California, which has been besieged by wildfires and drought, the result of extreme weather brought on by climate change.

As of 10:45 a.m. local time on Sunday, at least 50,000 utility customers in the Bay Area had lost power, according to a Pacific Gas and Electric outage map. The most outages were reported in Sonoma, San Mateo and Marin Counties.

At San Francisco International Airport, 139 flights had been delayed and 52 others had been canceled as of 10:10 a.m. local time, said Cathy Morrison, an airport duty manager.

“The atmospheric river is aiming a fire hose, if you will, into our area,” Sean Miller, a meteorologist for the Weather Service in Monterey, Calif., the forecast office for the Bay Area, said on Sunday.

An atmospheric river is a concentrated plume of moisture that extends over the ocean, typically in the troposphere, the lowest layer of the atmosphere, Mr. Miller said, adding that the current trough was angled toward the North Bay.

In the Pacific Northwest, a bomb cyclone, a type of storm known for its falling atmospheric pressure, was expected to push the atmospheric river south, affecting areas south of San Francisco, Mr. Miller said.

“This is more typical of something we tend to see in December or January,” he said, pointing out that the confluence of the two meteorological phenomena was “anomalous.”

On Tuesday, Gov. Gavin Newsom issued a proclamation extending California’s drought emergency statewide and asked residents to redouble their water conservation efforts. This has been the second driest year on record in state history, with near-record low storage in California’s largest reservoirs, the governor’s office said.

Severe drought conditions, worsened by climate change, continue to affect much of the Western United States and even the northern part of the Great Plains.

While droughts are not uncommon in the region, scientists say that climate change, in the form of warming temperatures and shifts in precipitation, is making the situation worse.