But the effects of the decrease wound up being muted. 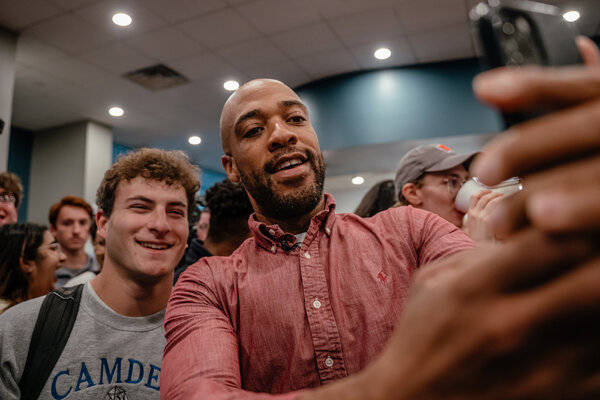 There was a lot of good news — or at least news that felt good — for Democrats this election cycle, from holding the Senate to remaining stubbornly competitive in the House.

But as more data becomes final, it’s clear that Black turnout is not one of those feel-good stories for the party.

We won’t get conclusive numbers on this for months, but the evidence so far raises the distinct possibility that the Black share of the electorate sank to its lowest level since 2006. It certainly did in states like Georgia and North Carolina, where authoritative data is already available.

The relatively low turnout numbers aren’t necessarily a surprise. After all, this was not supposed to be a good year for Democrats. Perhaps this is one of the things that went about as expected, with no reason to think it portends catastrophe for Democrats in the years ahead.

Still, relatively low Black turnout is becoming an unmistakable trend in the post-Obama era, raising important — if yet unanswered — questions about how Democrats can revitalize the enthusiasm of their strongest group of supporters.

Is it simply a return to the pre-Obama norm? Is it yet another symptom of eroding Democratic strength among working-class voters of all races and ethnicities? Or is it a byproduct of something more specific to Black voters, like the rise of a more progressive, activist — and pessimistic — Black left that doubts whether the Democratic Party can combat white supremacy?

Whatever the answer, it is clear that the relatively low Black turnout was not exactly disastrous electorally for Democrats in 2022. With the possible exception of the Wisconsin Senate race, it’s hard to identify a high-profile election where Democrats might have prevailed if the Black share of the electorate had stayed at 2014 or 2018 levels.

The Aftermath of the 2022 Midterm Elections

A moment of reflection. In the aftermath of the midterms, Democrats and Republicans face key questions about the future of their parties. With the House and Senate now decided, here’s where things stand:

Biden’s tough choice. President Biden, who had the best midterms of any president in 20 years as Democrats maintained a narrow hold on the Senate, feels buoyant after the results. But as he nears his 80th birthday, he confronts a decision on whether to run again.

Is Trump’s grip loosening? Ignoring Republicans’ concerns that he was to blame for the party’s weak midterms showing, Donald J. Trump announced his third bid for the presidency. But some of his staunchest allies are already inching away from him.

G.O.P leaders face dissent. After a poor midterms performance, Representative Kevin McCarthy and Senator Mitch McConnell faced threats to their power from an emboldened right flank. Will the divisions in the party’s ranks make the G.O.P.-controlled House an unmanageable mess?

A new era for House Democrats. Speaker Nancy Pelosi, the first woman to serve in the post and the face of House Democrats for two decades, will not pursue a leadership post in the next Congress. A trio of new leaders is poised to take over their caucus’s top ranks.

Divided government. What does a Republican-controlled House and a Democratic-run Senate mean for the next two years? Most likely a return to the gridlock and brinkmanship that have defined a divided federal government in recent years.

But it does help make sense of one of the stranger features of this election: how Republicans fared so well in the national vote, but routinely underperformed in critical states and districts. With the important exceptions of Georgia and North Carolina, the Black population share was below the national average in virtually all of the key districts and Senate contests.

Georgia and North Carolina are two of the states where voters indicate their race when they register to vote, offering an unusually authoritative look at the racial composition of the electorate. In both states — along with Louisiana — the Black share of the electorate fell to its lowest levels since 2006.

The average Black turnout rate in Georgia, Louisiana and North Carolina was more than 25 percent lower than among white voters, per state records.