Biden will announce a strategy change as the pace of vaccination slows. 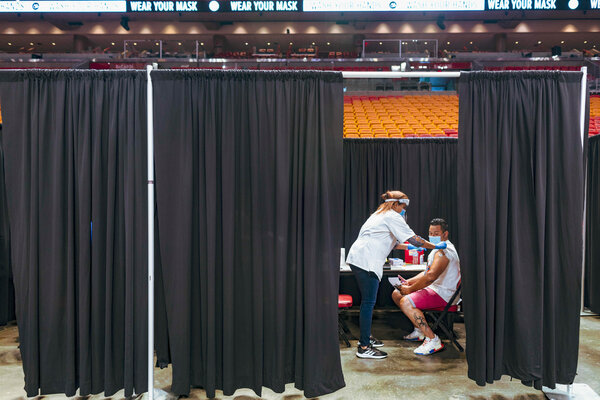 By Sharon LaFraniere and Noah Weiland

President Biden will announce Tuesday afternoon that he is directing tens of thousands of pharmacies to offer walk-in appointments for coronavirus vaccine shots, creating more pop-up and mobile clinics and shipping more doses to rural clinics, all aimed at vaccinating 70 percent of American adults at least partially by July 4.

The efforts reflect a shift in strategy by the administration as the pace of the nation’s vaccination effort slows. The federal government has also decided that if states do not order their full allocation of doses in any given week, that supply can be shifted to other states that want more.

In an afternoon address, the president plans to pledge more funding for outreach campaigns designed to convince those reluctant to get shots of the need to protect their own health and that of others. The number of shots administered daily has slowed by about half since a peak in mid-April, despite a flood of vaccine available.

Senior health officials have decided that herd immunity — the point at which the virus dies out for lack of hosts to transmit it — will likely remain elusive. But if the 70 percent to 85 percent of the population is vaccinated, the infection rate will be low enough so that normal life will be within reach, senior administration officials said.

The president will call for about 160 million adults to be fully vaccinated by Independence Day. As of Monday, more than 105 million Americans were fully vaccinated and at least 56 percent of adults — or 147 million people — had received at least one shot. That has contributed to a steep decline in infections, hospitalization and deaths across all age groups, federal officials said.

To increase availability of shots, the White House informed states that if they choose not to order their full allocation of vaccine each week, the doses will go back into a federal pool so that other states can draw on it, according to state and federal officials.

States that do not claim their full allotment one week will not be penalized because they will still be able to request the full amount the next week, officials said.

The shift, reported earlier Tuesday by The Washington Post, makes little difference to some states like Virginia that have routinely drawn down as many doses as the federal government was willing to ship. But it could help some states that are able to use more doses than the federal government allotted to them based on their population. They will now be allowed to ask for up to 50 percent more doses than the government allotted them.

Until now, White House officials had been unwilling to shift doses to states that were faster to administer them out of concern that rural areas or underserved communities would lose out to urban or richer areas where residents were more willing to get shots.

But with the pace of vaccination slowing nationwide, officials have determined that freeing up unused doses week by week will not exacerbate equity issues Some state officials have been arguing for the change for weeks.