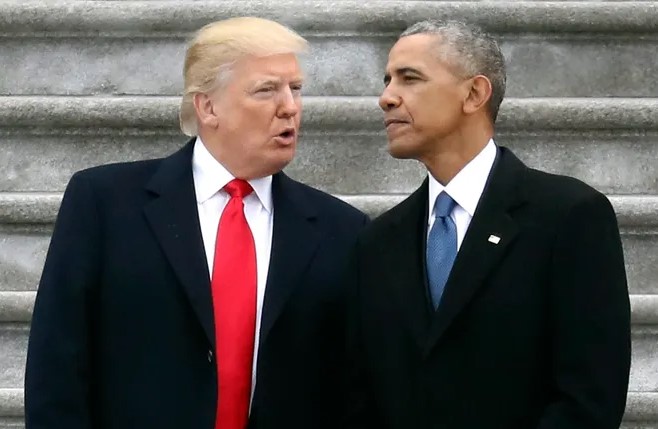 Former President Barack Obama called his successor a ‘corrupt motherf***er’, a ‘racist, sexist pig’ and other insults behind the scenes, a forthcoming tell-all book claims.

Obama, who has largely refrained from publicly criticizing Trump, expressed his true feelings about the 45th president to advisers and donors, according to Battle for the Soul: Inside the Democrats’ Campaigns to Defeat Donald Trump by The Atlantic staff writer Edward-Isaac Dovere.

The most scathing remark Obama made about Trump related to reports of the latter having phone conversations with foreign leaders including Russian President Vladimir Putin, without any White House aides listening in.

‘”That corrupt motherf***er,” he remarked,’ Dovere wrote in an excerpt obtained by The Guardian on Tuesday.

Obama apparently uttered searing private comments about Trump starting in 2017: ‘More often: “I didn’t think it would be this bad.” Sometimes: “I didn’t think we’d have a racist, sexist pig.” Depending on the outrage of the day… a passing “that f***ing lunatic” with a shake of his head.’

The 44th president also said ‘he’s a madman’ to ‘big donors looking to squeeze a reaction out of him in exchange for the big checks they were writing to his foundation’, according to Dovere.

Obama’s dislike for Trump is widely known, but had not previously been documented and with such candor.

According to Dovere, Obama initially preferred Trump in office over fellow Republican candidate Ted Cruz because he did not see Trump as nearly as clever as the Texas senator.

In his one term in the White House, Trump undid many of his predecessor’s policies and last May shot back at Obama’s criticism of his coronavirus response by calling him a ‘grossly incompetent’ president.

Dovere’s book, out on May 25, is packed with other fiery claims including that now First Lady Jill Biden after a presidential primary debate said of now Vice President Kamala Harris: ‘Go f*** yourself’.