BOYNTON BEACH, Fla. — When Andrew Gillum, the Democratic candidate for governor of Florida, conceded the race a week ago, it did not seem like a tough call.

At the time, he was down by 84,000 votes to the Republican, Ron DeSantis, and hundreds of his disappointed supporters were standing in a pelting rain outside his headquarters in Tallahassee.

But Mr. DeSantis’s lead steadily dropped in the days after the election, narrowing to just 33,000 votes on Saturday. Florida’s secretary of state ordered a recount, and Mr. Gillum, heeding staff members who had urged him from the beginning to stay in the game, withdrew his concession. He did so reluctantly, according to staff members and associates, only after being bombarded by supporters and pressured by allies in organized labor who wanted him to go for a win — or at least go down with a fight.

“Basically, we all wanted him to come back,” said Afifa Khaliq, program director with the Service Employees International Union Florida chapter, which helped coordinate Mr. Gillum’s field operation. No one, she said, had planned for a situation in which the popular Tallahassee mayor lost the election. “This was not supposed to happen. We are all still shock.”

That is why Mr. Gillum was standing at the pulpit of the St. John Missionary Baptist Church on Monday night — cross and choir at his back — demanding that election officials “count every vote.”

The about-face has given his second act a bittersweet, unfinished quality. He is committed to putting up a fight on behalf of the people who backed him, according to interviews with a variety of friends and campaign colleagues. He has few illusions, however, about prevailing in the recount, and is not likely to challenge a loss unless there is evidence of serious misconduct or incompetence.

But he enjoys a good fight, and has been campaigning with gusto, on borrowed time. Over the last three days, traveling to predominantly black churches, Mr. Gillum has hammered Republicans on the issue of voting rights and tapped a deep reservoir of grievance among supporters who believe he was beaten by a lesser opponent riding an undertow of racial resentment.

“Voter disenfranchisement doesn’t just show up when you put dogs on people or water hoses, or block entrances, that’s not the only form of voter disenfranchisement,” Mr. Gillum said at St. John, citing reports that some voters were turned away from polling sites because of discrepancies with their signatures on identification cards.

Mr. Gillum’s decision to withdraw his concession and ramp up his public profile again followed days of discussions within the campaign. Labor supporters and a top campaign aide, Brandon Davis, former chief of staff at the Democratic National Committee, had begun agitating for a reassessment of his decision shortly after his concession speech, campaign aides said, after receiving reports that poll workers had rejected a number of ballots over mismatched signatures — grounds for a possible legal challenge.

His return was welcome news to many of his supporters, who view the recount, if nothing else, as an opportunity to hold onto a moment, the near-election of Florida’s first black governor, as long as possible. 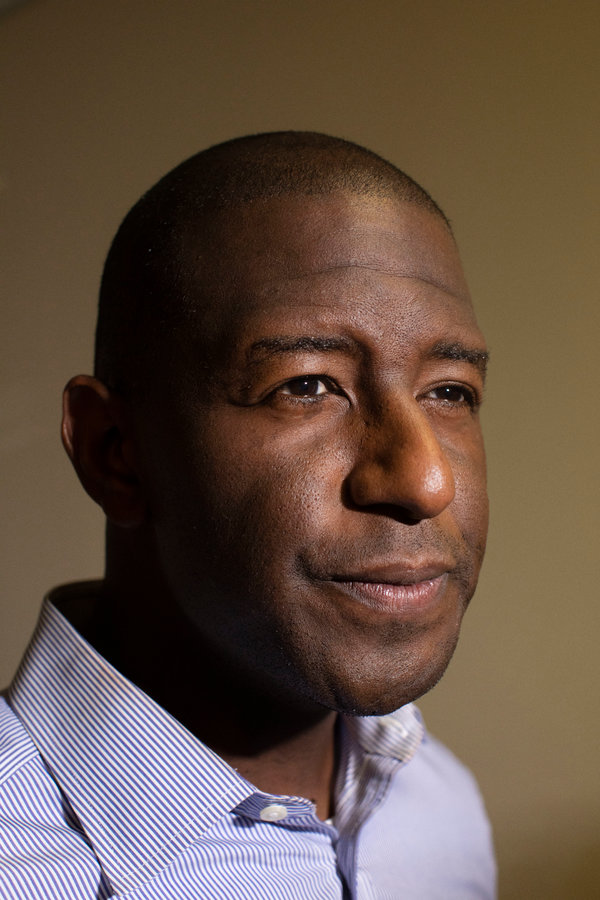 One member of Mr. Gillum’s security team, who genially blocked reporters from getting close enough to ask questions, referred to Mr. Gillum as “the governor.” But few in the church said they thought the recount would change the result.

“I am not a prejudiced person, but this election underscored the reality that institutional racism is alive and well, that there are white Americans who would simply not vote for a black man,” said Yvonne Odom, 71, a retired schoolteacher who became the first black student to integrate the high school in nearby Delray Beach in 1961.

“I’ve had white friends who told me how much they liked Andrew, and I know they voted for DeSantis,” Mrs. Odom said.

Marvin Dunn, a historian of race relations in Florida, believes that Mr. Gillum’s race was a factor, but not the only one. His unapologetic progressive political positions turned off some moderates, and a F.B.I. investigation into corruption in Tallahassee — though Mr. Gillum said he was told he was not a target of the inquiry — dented his image, Mr. Dunn said.

“Florida is changing. It is amazing that Gillum came within a whiff of winning, something that I would not have imagined 10 years ago,” said Mr. Dunn, a retired Florida International University professor. “It doesn’t mean racism has left Florida, the state is still a daughter of the Confederacy, but the balance of power is shifting. Race is less of an issue than it would have been in the past.”

Mr. DeSantis, for his part, has denied that race played any role in his campaign and called on Mr. Gillum to concede. Gov. Rick Scott, bogged down in a recount in his own tightly contested campaign for Senate with the incumbent Democrat Bill Nelson, has also called for a quick end to the recount.

So has President Trump, who echoed Mr. Scott’s so-far-unsubstantiated claims of voting irregularities. “The Florida Election should be called in favor of Rick Scott and Ron DeSantis in that large numbers of new ballots showed up out of nowhere, and many ballots are missing or forged. An honest vote count is no longer possible — ballots massively infected. Must go with election night!,” the president tweeted on Monday.

Still, Mr. Gillum has raised his own claims of voting disparities. He cited a report that a handful of voters in Bay County, a predominantly white Gulf Coast area ravaged by Hurricane Michael last month, were allowed to cast votes by email or fax while voters in more diverse counties on Florida’s densely populated East coast were screened more rigorously.

“In Bay County they were accepting votes by email,” he told his audience in Boynton Beach — 12 miles south of the president’s golf resort and Winter White House, Mar-a-Lago. “That was a deeply red county, a county I competed for even though I knew it was a deeply Republican area. But they want to question a man or a woman around here who stood 30 or 45 minutes or an hour in line?”

Mr. Gillum’s penchant for punching back has created an unusually deep bond between the mayor and African-American Floridians, who make about 13 percent of the state’s registered voters.

But how he carries that forward is still unclear. Mr. Gillum will finish his term as mayor of Tallahassee later this month; he has not ruled out running again for governor, and plans to spend the immediate future carving out a role as a national champion in the fight against voter suppression and disenfranchisement, which he sees as the central civil rights struggle of the Trump era, according to a half dozen friends and associates.

Yet if he is uncertain about his future, his supporters are equally unsure about their own.

Like many black leaders, John White II, pastor of Immanuel Temple African Methodist Episcopal Church in Pembroke Pines, threw his support behind Mr. Gillum early last year. But he did so with a gnawing foreboding about the outcome, and the election has done little to dispel his enthusiasm.

“I was apprehensive at first. I did not think the state was ready to embrace a candidate that looked like me,” said Mr. White, 49. “Here was this guy who was not your typical candidate and he was going after progressive and millennials like no one before him. And he was running this Obama-type campaign. I just found myself on board and thinking, maybe I am wrong about Florida.”