They’re not police officers, civil servants or members of the Venezuela government, which has all but disappeared from this impoverished part of the country.

Quite the opposite: They belong to one of Latin America’s most notorious rebel groups, considered terrorists by the United States and the European Union for carrying out bombings and kidnappings over decades of violence.

Venezuela’s economic collapse has so thoroughly gutted the country that insurgents have embedded themselves across large stretches of its territory, seizing upon the nation’s undoing to establish mini-states of their own.

And far from fleeing in fear or demanding to be rescued by the authorities, many residents here in Venezuela’s borderlands — hungry, hunted by local drug gangs and long complaining of being abandoned by their government — have welcomed the terrorist group for the kind of protection and basic services the state is failing to provide.

The insurgents “are the ones who brought stability here,” said Ober Hernández, an Indigenous leader on the Guajira peninsula next to Colombia. “They brought peace.” 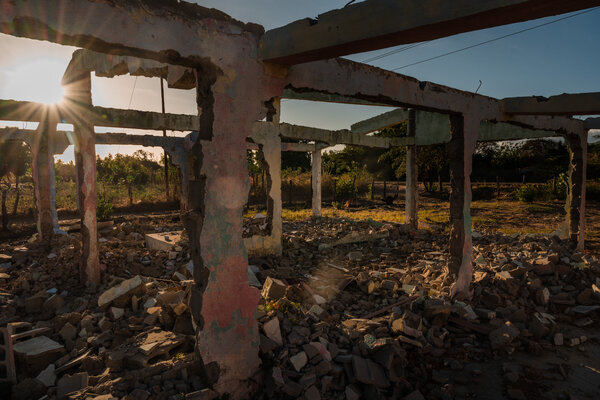 Marxist guerrillas from the National Liberation Army, known as the ELN, Latin America’s largest remaining rebel group, began crossing into Venezuela’s portion of the peninsula last year from Colombia, where they have been at war with the government for more than 50 years.

With his country in tatters, Venezuela’s authoritarian leader, Nicolás Maduro, has long denied the presence of Colombian insurgents on his soil. But by some estimates, guerrilla fighters from across the border now operate in more than half of Venezuela’s territory, according to the Colombian military, rights activists, security analysts and dozens of interviews in the affected Venezuelan states.

The insurgents’ reach into Venezuela became even more evident last month, when the government launched the biggest military operation in decades to displace a dissident faction of another Colombian rebel group — the Revolutionary Armed Forces of Colombia, or FARC — from the remote state of Apure, where the guerrillas set ambushes and improvised mines.

In the capital, Caracas, Mr. Maduro still holds a firm grip on the major levers of power, and his military is still capable of responding with force to threats to his rule. But in large parts of the country, the Venezuelan state and its authority are shrinking drastically, enabling armed groups and criminal organizations of all stripes to take over, often with devastating consequences.

We traveled to Venezuela’s Guajira peninsula in March at the invitation of Indigenous leaders to document the retreating state and the lawlessness filling the void.

Venezuela’s precipitous economic collapse — the result of years of government mismanagement, followed by crippling American sanctions against Mr. Maduro’s government — set off a war on the peninsula between criminal groups for control of contraband routes to Colombia, residents said. For two years, the brunt of the violence fell on the Indigenous Wayuu people, who have long straddled the two countries.

Caught in the crossfire, Wayuu families recounted fleeing their homes at night and calling out to straggling children as they ran, leaving behind all their possessions, their livestock and the fresh graves of their relatives.

Hundreds of them escaped across the scrubland into Colombia. Those who remained said they lived in terror, resigned that Venezuela’s government offered them no protection.

Then, they said, ELN rebels with guns and Colombian accents began to show up last year, offering the Wayuu help. Organized and well-armed, the ELN quickly displaced the local gangs that terrorized villages. The guerrillas imposed harsh penalties for robbery and cattle rustling, mediated land feuds, trucked in drinking water, offered basic medical supplies and investigated murders in a way the state never did, residents said.

It was hardly a charitable undertaking, though. In return for bringing stability, the ELN took over the smuggling and drug trafficking routes in the area, much as they have in parts of Colombia. They also began taxing shopkeepers and ranchers.

Like elsewhere in Latin America, Venezuela harbored illegal armed groups long before the current economic crisis. Colombian guerrillas have used the Venezuelan countryside as a haven for decades, and neglected Caracas shantytowns have long been home to organized crime.

But rarely have criminal organizations exerted such territorial and economic control — and the government so little — as they do now, a potent illustration of the nation’s decomposition under Mr. Maduro’s rule.

“Venezuela is sleepwalking into fragmentation by armed groups,” said Andrei Serbin Pont, a Latin America security analyst. “Recovering control of the territory will be an enormous challenge to whoever is in power in Venezuela in the upcoming decades.”

Once flush with oil wealth, Venezuela had over decades built a strong state that extended into the most far-flung hamlets through schools, police stations and roads.

But Venezuela’s oil export revenue has fallen by nearly 90 percent since the start of the economic crisis in 2014, according to Pilar Navarro, a Caracas-based economist. Public salaries have plummeted. State officials have increasingly resorted to graft and extortion. Security officers took to selling weapons and information to criminal groups and charging them for protection, according to interviews with police officers, and the government began retracting from great swaths of the country.

In the south of the country, the brutal armed groups known as syndicates that dominate illegal mining manage the supply of electricity and fuel, while also providing medical equipment to clinics in the towns they control.

Along Venezuela’s 1,400-mile border with Colombia, the ELN and other insurgents hold sway. Just a decade ago, the town of Paraguaipoa in the Guajira peninsula had several banks, a post office and a court. All have since closed. The hospital is out of basic medicines. The power goes out for days on end. Water pipes have been dry for years.

On the interstate road running through Paraguaipoa to the border, eight different government security agencies have checkpoints — including the state police, the national police, the intelligence agency, the national guard and the army. But they use the posts to extort traders and migrants trying to escape Venezuela, only deepening the distrust of the government.

Just steps away from the road, the state presence evaporates. The ELN and other armed groups control the myriad dirt tracks snaking toward the porous border — and the contraband that flows through them.

“We have to coexist with whoever there is; this is the reality,” said Fermín Ipuana, a local transport official in the Guajira. “There’s no confidence in the government here. It only extorts. People look for help elsewhere.”

Gasoline trafficking to Colombia, which had sustained the Guajira’s meager economy when fuel in Venezuela was plentiful and subsidized, has dwindled as Venezuelan refineries ground to a near halt. Wayuu communities, which for decades made a living trafficking goods across the border, began going hungry.

The fuel now trickles in from the opposite direction — from Colombia — to assuage Venezuela’s chronic fuel shortages, even though Venezuela has the largest proven oil reserves in the world.

The tourists who bought her woven purses and hammocks have disappeared with the pandemic. Her family now survives by biking to Colombia to sell scavenged scrap metal every week. But Ms. Jusayu has been homebound because of a stray bullet that injured her during the recent gang war.

When violence broke out in Guarero in 2018, the police and soldiers largely stood by as criminals fought brutally over the smuggling routes, according to residents and local rights activists.

As the violence spiraled, entire Wayuu clans became targets. Magaly Baez said 10 of her relatives were killed and that her entire village, located along a major gasoline trafficking route, was demolished. Most residents fled to Colombia.

“We suffered hunger, humiliation,” said Ms. Baez, “listening all day to children crying: ‘Mami, when are we going to eat?’”

Residents spoke of massacres, forced curfews and mass graves that brought to their remote corner of Venezuela the kind of terror Colombia experienced during its decades-long civil war.

Some people dared to report homicides, but it didn’t lead to charges, residents said. The crimes went unpunished — until the ELN stepped in to help last year, said Mr. Hernández, the Wayuu leader in Guarero. His account was corroborated by interviews with dozens of other Indigenous residents.

As the ELN took control, the fighting subsided last year, and refugees began trickling back. Street life resumed in previously deserted towns, and young men went back to ferrying fuel drums from Colombia on bicycles and motorbikes to resell in Venezuela.

In Guarero, when the heat cools at sunset, children once again gather at the soccer field where Junior Uriana, a 17-year-old, was shot dead in 2018.

His aunt, Zenaida Montiel, buried him in her backyard in a simple grave next to her son, José Miguel, who was murdered a week earlier. Ms. Montiel said she still didn’t know why they died. She was too scared to go to the police or ask for help, she said.

Now, things have changed, she said.

Reporting was contributed by María Iguarán from Guarero; Isayen Herrera from Caracas, Venezuela; and Sheyla Urdaneta from Maracaibo, Venezuela.