Any eligible adult in New York will be able to walk in for vaccination at state-run sites. 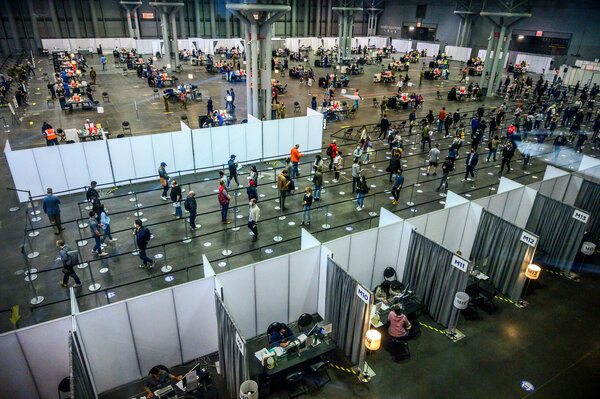 All state-run mass vaccination sites in New York will allow anyone 16 or older to walk in without an appointment and get their first dose, beginning on Thursday, Gov. Andrew M. Cuomo announced on Tuesday.

Walk-in vaccinations will be available at state-run sites in New York City, like the Javits Center in Manhattan and Yankee Stadium in the Bronx, as well as on Long Island and in upstate cities like Albany and Syracuse, the governor said.

Second doses will still be given by appointment, which will be scheduled after the first dose is administered.

“Just show up, and roll up your sleeve, and the mass vaccination sites have the capacity to handle it,” Mr. Cuomo said at a news conference on Tuesday.

Other kinds of vaccine providers in the state, like pharmacies and sites run by cities and counties, will have the option to start allowing walk-ins as well, a step the governor encouraged.

Allowing walk-ins simplifies a process that bedeviled many New Yorkers earlier in the pandemic, when obtaining a vaccine appointment often took hours of online searching and some luck as well. The new policy may also draw out people who are still hesitant to get vaccinated, Mr. Cuomo said.

“This is our way of saying, if you were intimidated by the process of trying to make an appointment, that’s gone,” the governor said.

He said it was feasible to allow more walk-ins because fewer vaccinations were being administered across the state now — about 115,000 doses a day — than a few weeks ago, when the state peaked at about 175,000 doses a day.

“The demand is reducing, fewer people are asking for appointments,” Mr. Cuomo said.

State data show that just under 45 percent of New York residents, or just over 8.9 million people, had received at least one dose of the vaccine by Tuesday morning.

Mr. Cuomo also announced at the news conference that New York would adopt the new C.D.C. guidance that fully vaccinated people can safely engage in most outdoor activities without masks.

Reports of new Covid-19 cases and hospitalizations have declined in the state, according to a New York Times database, but the risk of infection still remains very high in New York City, where some troublesome variants of the virus appear to be on the rise.