Mr. DeSantis, a 40-year-old former congressman, fended off his opponent, Andrew Gillum, one of the strongest candidates Florida Democrats had fielded in years. Republicans have now won every election for governor since 1998.

“Every two years there’s one day in November where elites don’t call the shots, don’t craft the narrative or set the agenda,” Mr. DeSantis told jubilant supporters festooned in confetti in an Orlando hotel ballroom late on Tuesday night. “On Election Day, it’s the voice of the people that rules.”

He thanked President Trump for standing by him “when it wasn’t necessarily the smart thing to do.”

“I think you are going to get tired of me calling you asking you for things for Florida,” Mr. DeSantis told the president from afar.

Mr. DeSantis pledged to choose “constitutionalist” judges — he will get to name replacements in January to three liberal-leaning justices who are term-limited on the State Supreme Court — fight toxic algae blooms, protect military veterans and keep scholarships for low-income students to attend private schools.

Mr. Gillum conceded the race at around 11 p.m. after running behind most of the night. “We could not be prouder of the way we ran this race,” he told supporters at Florida A&M University. “We recognize that we didn’t win this tonight.”

In an emotional address, in which he appeared close to tears, he apologized to those who had worked on his campaign. “I sincerely regret that I couldn’t bring it home for you,” he said. But, he added: “Are we going to wake up and bask in sorrow and defeat? Or are we going to get up and reassert ourselves at the mission at hand?”

The crowd, which waited through much of the night in pouring rain, held up phones and filmed the speech, exchanging hugs and praying. A few supporters cried.

With Mr. DeSantis’s win, Republicans held onto the governor’s mansion two years after Hillary Clinton seemed to open a door for Democrats by only narrowly losing to Mr. Trump in the country’s largest battleground state. The president may take much of the credit for Tuesday’s success: He helped elevate Mr. DeSantis, a loyal acolyte, during the primary and rallied twice for him in the final days of the campaign. Going into the 2020 election, Mr. Trump can now count on a friend in Tallahassee who will be able to exert influence over the crucial redrawing of the state’s congressional and legislative districts after the next census.

Florida Democrats, who have now lost three consecutive elections for governor by about one percentage point, will be left to grapple once again with what could have been. Senator Bill Nelson, the only Democrat elected statewide, was losing late on Tuesday to Gov. Rick Scott in a race even tighter than the governor’s contest. Mr. Scott poured more than $50 million of his fortune into his campaign, an eye-popping amount that helped lift Mr. DeSantis and other Republicans down the ballot. 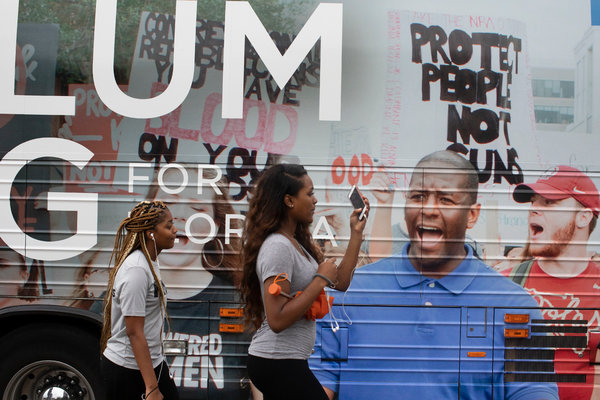 Democrats had pinned their hopes on Mr. Gillum, the mayor of Tallahassee and a talented campaigner who upended his party’s orthodoxy and ran as a defiant progressive instead of the more typical centrist thought to appeal to independent voters and moderates. Mr. Gillum, who would have become Florida’s first African-American governor, came close to succeeding, garnering over a million votes more than Mr. Scott did in 2014. But he ultimately could not overcome the state’s inexorable demographics: Older white voters who lean conservative vote at far higher rates than do millennial and minority voters, whom Mr. Gillum needed to turn out in big numbers to assemble a winning coalition.

[Follow live results for the House of Representatives and the Senate, along with our election forecasts]

The Florida story on election night in 2018 played out much as it did in 2016: Big, urban counties that lean Democratic reported a significant lead for Mr. Gillum. But that advantage was wiped out as results rolled in from white suburbs and exurbs in red counties, especially in the conservative Panhandle and on the southwest coast, where Mr. Trump campaigned last week and turnout was impressively high.

Mr. Gillum’s stunning win in the August primary overshadowed Mr. DeSantis’s own noteworthy accomplishment: He defeated Adam Putnam, the state agriculture commissioner, by an astonishing 20 percentage points. Mr. Putnam had seemed a lock for the Republican nomination before Mr. Trump stepped in for Mr. DeSantis, an Ivy League graduate and former Navy legal officer at Guantánamo Bay and in Iraq who gained a national audience by vigorously defending the president in frequent Fox News appearances.

Still, Mr. DeSantis stumbled early on in the general election, starting the day after the primary, when he went on Fox News lauding Florida’s economic success under a Republican administration and warned that electing Mr. Gillum could “monkey this up,” a phrase seen by many as a racist dog whistle. Mr. DeSantis denied any racial intent in his comment.

After effectively losing the month of September to various controversies, Mr. DeSantis eventually regrouped, hiring Mr. Trump’s Florida campaign manager from 2016, Susie Wiles. He sharpened his message against Mr. Gillum, portraying him as a corrupt radical whose proposals were out of step with the values of most Floridians.

[What to watch around the country as live results come in.]

On Sunday, a day after Mr. Trump’s final visit, Mr. DeSantis drew hundreds of people to a campaign rally in South Daytona, in his former congressional district. His “secret weapon,” he said on Tuesday, was his running mate, State Representative Jeanette Nuñez of Miami, who helped him solidify support among Cuban-American Republicans and will become the state’s first female Latina lieutenant governor.

Mr. DeSantis’s campaign platform, derided by Democrats as thin, essentially came down to promising to continue on the path set by Florida’s current governor.

“There’s a reason people move to Florida: The people who move to Florida don’t want Florida to turn into one of those states they came from,” said Blaise Ingoglia, the chairman of the Republican Party of Florida. “I don’t think that resonated with independents.”

But many voters said what they found most attractive about Mr. DeSantis was his friend in the White House.

“I voted Republican all the way,” Renee Wilson, 69, said after voting in Palm Beach Gardens. “To defend Trump.”