Until recently, the most important thing to know about Amazon for residents of the Queensbridge Houses, the country’s largest public housing project, was that any packages left in a lobby would likely be stolen.

But Amazon may soon be a far larger presence in their New York City neighborhood.

The company owned by Jeff Bezos, the world’s richest man, seems set to establish a major headquarters in Long Island City, Queens, where Queensbridge’s 26 aging buildings are home to a mostly black and Hispanic population with a median household income of $15,843, well below the federal poverty line for a family of four.

Here, where livings are eked out on meager paychecks, or social service assistance, with nearly 60 percent of its households relying on food stamps, the new neighbor will be one of the world’s most profitable and famous high-tech companies, bringing what could be a work force of 25,000 people making salaries upward of $100,000.

The stark contrast amplifies some of the social and economic tensions coursing through American society — a widening income gap, a lack of access to high-paying jobs for many minorities and a technology sector struggling to diversify.

The planned location for the new headquarters is still unclear, as is whether Amazon will deliver any benefits to the roughly 6,000 people who live in the Queensbridge Houses and other disadvantaged parts of the neighborhood. 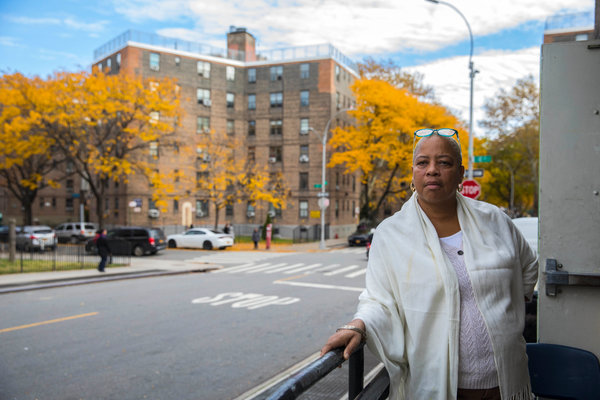 “That’s why we’re leery about them coming in.”

As New York City seeks to challenge Silicon Valley’s dominance as a tech hub — Google recently announced plans for a significant expansion in New York — the explosion of jobs has helped propel the local economy. But it has not mitigated the “tale of two cities” narrative of economic disparity that Mayor Bill de Blasio has vowed to address in a city where the poverty rate in 2016 was 19.5 percent, significantly higher than the national rate.

That stratification is keenly felt in Queensbridge, a gritty complex just across the East River from the East Side of Manhattan and some of the wealthiest neighborhoods and real estate in the country. Many Queensbridge residents said they feel left out of the city’s booming economy.

Hard by the Queensboro Bridge, the Queensbridge Houses have been plagued with crime and drugs. Those problems have eased in recent years, Ms. Simpson said, and community programs have improved the quality of life. Last year, the housing project did not record a single shooting, something that had not happened in more than a decade and was a source of pride.

But the neglect that afflicts many public housing developments and has led to harsh criticism of the de Blasio’s administration, persists here, residents and other local leaders said.

“There are still a lot of problems with the apartments — the lack of heat and hot water, non-working elevators, mold and broken front doors,” said Jimmy Van Bramer, the city councilman whose district includes the Queensbridge Houses.

Tyshema Basnight, 42, said she had been trying to rejoin the work force after raising a family. She has an associate degree in computer science and a tech job at Amazon would be a dream job, she said.

“For now, I’m just looking for secretarial work,” said Ms. Basnight, who was among several residents lined up for one of the few aging computers available in the tenants association office for residents who do not have computers of their own.

The office is not on the cutting edge of the digital frontier. And all the buzz over the e-commerce behemoth transforming Long Island City into a gleaming new-economy tech hub was met with skepticism, if not outright hostility.

Many businesses — including travel and financial companies and hotel chains — have opened in recent years in the area, but Ms. Simpson said they have not hired local residents or offered to “give back” to the community.

“They did not hire here — they brought in their own people,” she said. “My thing is: If you build here, hire here.”

A spokesman for Amazon, Sam Kennedy, declined to comment on its plans in New York, but said that the company has a proven track record of funding and creating programs for the needy in Seattle, where Amazon has its main headquarters.

This includes donating tens of millions of dollars, creating affordable housing, opening a shelter in its office complex for homeless families and creating a training program for the food service and culinary industries for less-advantaged residents.

The company also says it has spurred the creation of 53,000 outside jobs in industries ranging from construction to health care, and has stimulated the establishment of more than 2,000 new small businesses.

But past the gleaming skyline of high-rises, in Queensbridge and several other smaller housing projects in Long Island City, many residents fear that Amazon’s arrival will only intensify the gentrification that is making the neighborhood less affordable for people of limited means.

It is still unknown what financial incentives city and state officials may have offered Amazon or what, if any concessions, they have extracted from the company to help the neighborhood.

City officials noted that the Queensbridge Houses had already been the focus of attention with projects to replace the roofs on all 26 buildings and install nearly 900 new security lights and 360 surveillance cameras.

Mr. de Blasio is grappling with a lead paint scandal at the city’s public housing agency and accusations that officials had downplayed the number of young children in public housing with elevated levels of lead in their blood.

They said they were considering setting up programs similar to a city-funded employment center in the Brooklyn Navy Yard. Since it opened in 1999, the center has placed more than 300 people per year in jobs at the navy yard, of which 35 percent have been public housing residents in recent years.

“This is a tremendous opportunity to bring tens of thousands of good jobs to our city and open up good-paying careers in technology for New Yorkers,” Ms. Meyer added.

Still Mr. Van Bramer questioned the city and state’s eager courting of Amazon at a time when the housing complex is still in need of funding for basic repairs.

“If we are helping a headquarters with 25,000 employees move in, a stone’s throw from the largest housing development in the United States of America, we need more than lip service for the people of Queensbridge,” he said. “Before we throw corporate welfare at the richest man in the world, we should think about the crisis in Nycha, and address the needs of the community, including training Queensbridge residents for tech jobs — or they will be looking through the glass from the outside.”

Outside a cluster of stores in the center of the Queensbridge Houses, Piif Jones, 29, said he has Amazon packages delivered to a secure locker at a nearby local check-cashing center, to avoid having them stolen from his lobby.

Mr. Jones is an up-and-coming rapper trying to follow the illustrious tradition of hip-hop artists — Nas, Mobb Deep, Marley Marl, and others — who have come out of the housing project and have chronicled its hardscrabble conditions in verse.

He spoke of belonging to the Queensbridge “family,” and taking pride in its success stories, including the former N.B.A. star, Metta World Peace, formerly known as Ron Artest Jr.

Mr. Jones said he trained on computers in high school and if his rap career fizzles, he would happily take a job at Amazon.

“If Amazon doesn’t hire from this community, we should boycott them and shut them down,” he said.

But Andrew Johnson, a sidewalk bookseller on the edge of the housing complex, near the busy entrance to the 21st Street-Queensbridge station on the F Train, took a more positive attitude.

“Not everyone here has a Ph.D., but anyone eager to work should be able to get job,” he said. “It can’t be nothing but a plus.”