The Great War was ending so New York City went wild, from its harbors to churches and streets and skyscrapers. The electric charge of that moment can still be felt a century later in a letter from Captain John F. Sweeney of the 15th Precinct in Manhattan, who described the scene to one of his men serving overseas.

A police officer at 14th Street and Third Avenue called the station house at 3:30 a.m. to say that he had spotted an extra edition — that era’s version of a news alert — announcing the signing of the Armistice that ended World War I.

“At 4:15 the first steam whistle was going, to be followed by another, first from one section of the city and then another, then the church bells to peal out the wonderful news, heads began to appear from the windows and people would say, hey cop, what is it all about,” Captain Sweeney wrote, breathless in punctuation, “and if I answered one, I answered 150 that the war was over.” 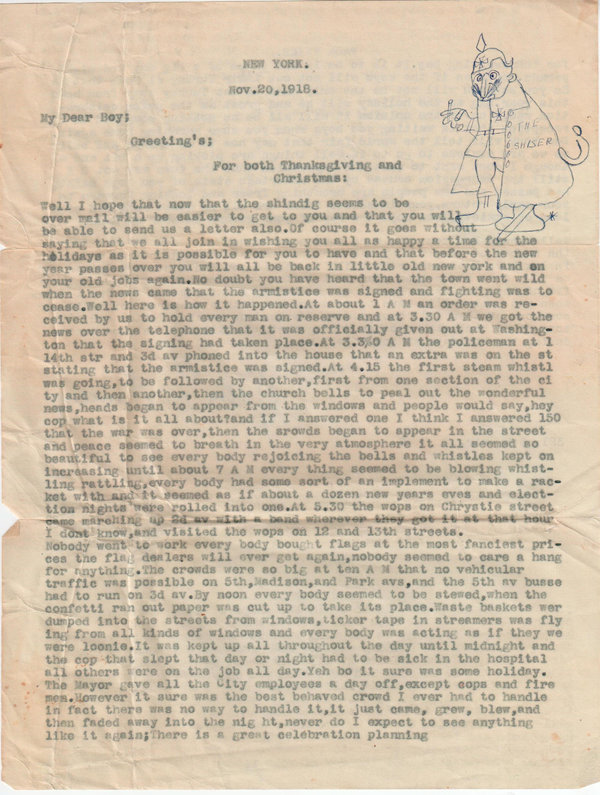 [See previously unpublished photos of Armistice Day celebrations from around the world.]

Captain Sweeney’s letter reached Officer Emmanuel Zwerling, 31, who was serving with the 308th Infantry in France. The letter has a hand-drawn cartoon of the hated Kaiser Wilhelm II, the German emperor, and also casually refers to New York Italians with an epithet common in those days. Officer Zwerling’s great-granddaughter, Jennifer Krohn, gave the letter and other memorabilia to the city’s Patrolmen’s Benevolent Association.

“Peace seemed to breathe in the very atmosphere,” the captain said, for all the boisterous carry-on. It was a day he never expected to see again.

“By noon every body seemed to be stewed, when the confetti ran out paper was cut up to take its place,” he wrote. “Waste baskets were dumped into the streets from windows, ticket tape in streamers was flying from all kinds of windows.”

Manny Zwerling, who retired from the police department as a sergeant, died in 1989 at 102. He served as treasurer of the Shomrim Society, a fraternal organization of Jewish officers.

Captain Sweeney served 41 years in the city police department. He later went on to become the first chief of police in Long Beach on Long Island.

“There are quite a few of the girlies on second av anxiously inquiring for you,” he advised Officer Zwerling, “and I think when you return I’ll have to send you out with a chaperone for a while or some one of them will hook you up.”

Jim Dwyer joined the Times in May 2001. He was the winner of the 1995 Pulitzer Prize for commentary and a co-recipient of the 1992 Pulitzer for breaking news. He is also the author or co-author of six books.