A court filing says 445 migrant children are still in custody after being separated from their parents under Trump. 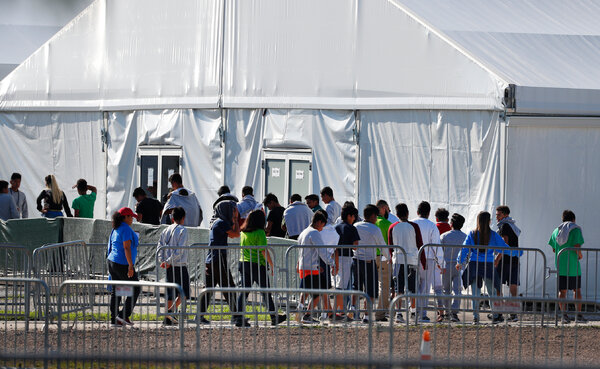 The parents of 61 migrant children who were separated from their families at the U.S.-Mexico border by the Trump administration have been located since February, but lawyers still cannot find the parents of 445 children, according to a court filing on Wednesday.

In the filing, the Justice Department and the American Civil Liberties Union indicated slow progress in the ongoing effort to reunite families that were affected by a policy to prosecute all undocumented immigrants in the United States, even if it meant separating children from their parents.

The update in the reunification efforts comes as the Biden administration struggles to address a growing number of migrants seeking entry into the United States at the border with Mexico, including many children being held in jail-like facilities for longer than the law permits because of overcrowding.

Though the court filing says that U.S. agencies and the A.C.L.U. continue to work together to reunite the families, the effort has proved to be more difficult as time passes. The initial searches began years ago, under the Trump administration, after the policy of family separation was rescinded in the summer of 2018.

Only a fraction of the roughly 2,700 children who were initially separated under the policy still remain, and President Biden has indicated that reuniting those remaining children with their families is a priority. During his first week in office, Mr. Biden signed an executive order creating a task force led by Alejandro N. Mayorkas, the homeland security secretary, to focus on reuniting families.

Advocates for families separated at the border during the Trump administration continue to pressure the president to move faster to reunite them. Lee Gelernt, an A.C.L.U. lawyer who has waged a lengthy legal battle against Mr. Trump’s separation policy, said some progress had been made but much more needed to be done.

“We and the Biden administration have enormous work yet to do if we are going to fix the terrible abuses of the Trump administration’s family separation practice,” he said.