Why the Nile could see a ‘water war’ 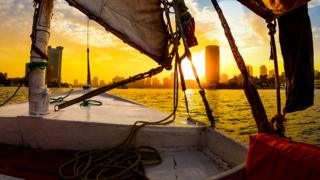 A new dam on the Nile could trigger a war over water unless Ethiopia can agree a deal with Egypt and Sudan, writes the BBC’s Africa Correspondent Alastair Leithead.

It is often said the world’s next world war will be fought over water and there are few places as tense as the River Nile.

Egypt and Ethiopia have a big disagreement, Sudan is in the middle, and a big geopolitical shift is being played out along the world’s longest river.

There’s been talk about a dam on the Blue Nile for many years, but when Ethiopia started to build, the Arab Spring was underway and Egypt was distracted.

“Egypt was the gift of the Nile” the pharaohs said, and they worshiped the river as a god.

Explore the Nile with 360 video

Join the BBC’s Africa correspondent Alastair Leithead and his team, travelling from the Blue Nile’s source to the sea – through Ethiopia and Sudan into Egypt.

This 360° video is a version of the first VR documentary series from BBC News. To view the full films, click here.

For thousands of years, and more recently buoyed by British colonialism, Egypt has wielded political influence over the Nile.

But the ambition of Ethiopia is changing all that.

There are few African countries with a plan to deal with the doubling of the continent’s population over the next 30 years.

Yet despite its political challenges and its limited freedoms, industrial parks are being built as Ethiopia seeks to transform itself into a middle-income country, and so it needs electricity.

Africa’s largest hydroelectric power station and one of the world’s largest dams will do that, but with 85% of the river emerging from the Ethiopian highlands, Egypt is concerned its rival has the capability to control the flow of the river.

“It’s one of the most important flagship projects for Ethiopia,” says Seleshi Bekele, the country’s Minister for Water, Irrigation and Electricity.

“It’s not about control of the flow, but providing opportunity for us to develop ourselves through energy development. It has a lot of benefit for the downstream countries.”

And Sudan certainly welcomes it.

The Grand Ethiopian Renaissance Dam is just a few kilometres from the border and the pylons are already in place, waiting for the power generation to begin and for cheap, renewable power to fizz through the cables.

Dams also regulate the flow of the river.

At the moment the difference between high water and low water level in Sudan is 8m, and that makes its vast irrigation projects harder to manage.

With the dam in place, the difference will be 2m and the flow of the river will come year-round.

“It’s the best thing that’s happened for a long time and I think the combination of energy and regular water levels is a great blessing.”

He understands that Egypt is worried, as the UN predicts the country will start suffering water shortages by 2025.

“The Nile is the lifeline of Egypt, so for them, I wouldn’t say they are paranoid, but they are very concerned about anything that you do with that water.”

Any threat to Egypt’s water is considered a threat to its sovereignty.

“It’s very much a game changer, a new order is beginning in the whole region now,” believes Rawia Tawfik, an Egyptian academic working in Germany.

“Ethiopia for the first time is combining both the physical power of being an upstream country that can in one way or another control the River Nile’s flow, and the economic power of being able to construct a dam depending on its own domestic resources.”

“One acre at least makes one family survive. A family in Egypt is average family size about five persons. So this means about one million will be jobless.

“It is an international security issue.”

Hydroelectric power stations do not consume water, but the speed with which Ethiopia fills up the dam will affect the flow downstream.

They would like the water to be generating power as soon as possible, but it should take time to fill up a reservoir which is going to be bigger than Greater London and will flood the Nile for 250km (155 miles) upstream.

If it is filled within three years the level of the river will be affected, but over six or seven years it won’t have a major impact on water level.

Negotiations between Egypt and Ethiopia are not going well.

The discussions aren’t even at the stage of assessing the impact, but are still about how that will be determined.

Sudan and Egypt are also at loggerheads over how much water Sudan uses – and how that amount may increase when the dam is finished.

The irony is Egypt did in the 1960s exactly what Ethiopia is doing today, when it built the Aswan High Dam.

For a revolutionary post-colonial country it was a proud national achievement, and Ethiopia sees it in the same way.

Ethiopia wants to pay for this project itself without international help.

Government workers are giving a month’s salary a year to the project – and not all are happy about that.

There is a lottery to fund the dam and bonds are being put up for sale.

The dam is impressive. After five years it is two-thirds finished – and it already crosses the river.

There is nothing Egypt can do about it, except take military action which would be extreme.

That is why diplomacy and collaboration are the only means of resolving this issue.

But when issues like nationalism and the relative strength and importance of countries is concerned, it muddies the water.

The world’s first war over water can be avoided on the Nile, and it could even be an example of how to resolve complex disagreements over water.

But it will take a lot more effort to navigate an agreement between Ethiopia, Sudan and Egypt.