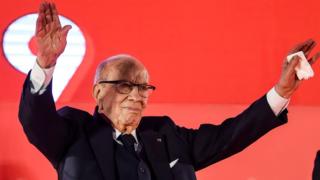 Tunisia’s Beji Caid Essebsi, who has died at the age of 92, was the world’s oldest sitting president.

He was prominent in politics for more than half a century, and was affable, jovial and confident.

For a man way beyond retirement age, Essebsi – a secularist in a region where Islamists are a powerful force – boasted a surprising amount of energy and political ambition to win a run-off vote at the age of 88.

In his opponents’ eyes, Essebsi represented a subtle return of the old guard, and an undermining of the gains of the revolution which overthrew long-serving ruler Zine al-Abidine Ben Ali.

But many of his supporters saw him as safe pair of hands who would maintain Tunisia’s strong secular tradition – a reputation his government has lived up to by announcing earlier this month a ban on women wearing the niqab, which covers the entire face apart from the eyes, in government offices, citing security reasons.

Essebsi was among the founding fathers of the Tunisian republic formed after independence from France in 1956, and served as interior minister in then-President Habib Bourguiba’s government.

It was credited with wide-ranging social and economic reforms, but was also accused of having established a repressive regime which cracked down on the opposition and guaranteed domination by a single party, the Rally for Constitutional Democracy (RCD), until the 2011 revolution.

Essebsi’s critics said he had overseen the establishment of a police state during his term as interior minister, and carried some responsibility for the repression and torture seen in Tunisia during the Bourguiba era.

But his supporters said he was a liberal who failed to persuade Bourguiba to embrace political pluralism.

It has been spared much of the violence seen elsewhere in North Africa and the Middle East since the 2011 Arab uprising, although it has been the target of militant Islamists over the years.

Some saw Essebsi’s government as too authoritarian in its response to security challenges, and too ready to sweep the crimes of the past under the carpet.