The man who stepped out of his father’s shadow 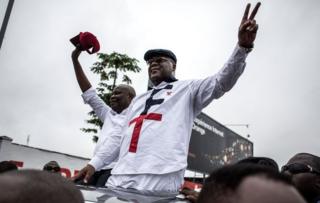 Felix Tshisekedi Tshilombo has been named in provisional results as the winner of the Democratic Republic of Congo’s presidential election. Louise Dewast says until now he was better known for who he was related to.

A 55-year-old father of five, Mr Tshisekedi, is mostly known for being the son of the late veteran opposition leader Etienne Tshisekedi, but he insists he is not trying to rival his father.

Felix Tshisekedi’s father founded the Union for Democracy and Social Progress (known by its French initials UDPS) in 1982, and was a feared rival of dictator Mobutu Sese Seko, who died months after being ousted in 1997, and later of Presidents Laurent and Joseph Kabila.

Under his leadership, the UDPS became the country’s largest opposition party, but he never succeeded in winning office.

His legal challenge to the official results of the 2011 presidential election, which showed he won 32% of the vote to Joseph Kabila’s 49%, failed.

The veteran opposition leader died in 2017 leaving a big question over who would succeed him.

His former chief of staff Albert Moleka told the BBC that his son was not necessarily the obvious choice: “Etienne Tshisekedi was very vocal about his scepticism towards his son’s abilities. He was very demanding of his son.

“He was someone who fought for the people and so he wasn’t going to give his son a free pass.”

Mr Moleka said it was the presidential hopeful’s mother, Marthe Kasalu, who pushed for the son to become the leader.

In March this year, he was voted in as the party’s new head and became its de facto candidate for the presidential elections.

But Mr Tshisekedi did not simply cash in on his name. He has been immersed in politics from a very young age, and had to work his way through the party.

He also had to suffer the consequences of his father’s political activism.

When the UDPS was created, the Tshisekedi family was forced into internal exile to their home town in the central Kasai province.

They stayed there until 1985, when President Mobutu allowed the mother and children to leave.

Felix Tshisekedi then went to the Belgian capital, Brussels. After completing his studies there he took up politics, working his way through his father’s party to become national secretary for external affairs for the UDPS, based in Brussels.

“He made powerful friends and allies among the diaspora there, but he was sometimes overlooked – and so it wasn’t easy for him,” said Mr Moleka.

“Felix has always shown a lot of willingness. He’s courageous but his problem is that he needs to figure out what his ultimate goal is.”

For now, the provisional new leader is attempting to represent change for DR Congo, which has not known a peaceful transition of power since independence in 1960.

“I don’t have any ambition to rival my father. He is my master, and you don’t rival the master,” Felix Tshisekedi said before the country’s electoral commission announced the result.

“But I’m going to try my best to perpetuate his dream, his dream of a country of rule of law, of a better Congo, where our sons and daughters can flourish, that’s what I am pursuing.”

Mr Tshisekedi has said he will make the fight against poverty a “great national cause”.

“It’s really the minimum we can do I think, and the minimum people expect from us,” the candidate earlier told the BBC in an interview in the capital, Kinshasa.

He says his programme can be accomplished over two presidential terms – a period of 10 years – and will cost an estimated $86bn.

“The Tshisekedis had a difficult life and so for Felix Tshisekedi, these elections are a bit of a revenge, for his family,” he said.

When presenting his programme during a press conference, the candidate was pressed about his lack of experience.

In the months prior to the vote, opposition parties in the DR Congo – including the UDPS – had said that they would pick a joint candidate for the election to increase their chances of defeating the governing party.

The election involves only one round of voting, and as the candidate with the largest share of the vote wins, they believed a split in the opposition vote could prove disastrous for them.

But after the opposition parties made the decision to pick Martin Fayulu as the unity candidate, Mr Tshisekedi backed out and decided to run.

He was supported by Union for the Congolese Nation leader Vital Kamerhe – his running mate.

Although Mr Tshisekedi argued he was simply following the wishes of the party base, many in the country criticised his decision not to support Mr Fayulu.

“The context of these elections isn’t a normal one,” Mr Tshisekedi told the BBC ahead of the vote.

“We are living in dangerous and unstable times but at the same time there is a strong desire of the population to have these elections, because people are really fed up with this regime, installed since 1997, that has brought its load of violence, incredible violence.”

To become president, something his father never managed to do, Mr Tshisekedi had to convince opposition supporters that he was the candidate best placed to capitalise on that feeling as well as overcome the power of the governing party.