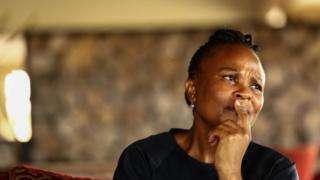 South Africa’s corruption watchdog is making headlines for all the wrong reasons.

Just three years into the job, there have already been two attempts to remove Busisiwe Mkhwebane from office. She has faced public scrutiny, accusations of political bias and has most recently become the subject of a scathing finding by the country’s constitutional court.

The latest of her controversies is a ruling by the country’s highest court that the lawyer lied under oath and acted in bad faith – and should pay a fine for her dishonesty. It follows a contracted legal battle between her office and South Africa’s reserve bank.

This is not her first run-in with the courts – and is odd for someone whose very responsibility is upholding the law.

A number of Ms Mkhwebane’s major investigations have recently been overruled by the courts in South Africa. They have said her findings were “invalid” and “unconstitutional”.

This has raised concerns about her fitness for office and questions about whether she has somehow become a pawn in a far larger political game.

Who is Ms Mkhwebane?

Her experience in government institutions spans over two decades – she has worked as a researcher, investigator, advocate for refugee rights and an immigration counsellor at the South Africa embassy in China. All seemingly without much controversy.

She was appointed to the office of public protector in 2016, beating 13 well-qualified candidates, including a former judge, to the job.

The interviews were televised and consisted of a gruelling interrogation by a parliamentary panel that included members of the opposition parties as well as officials from the ruling African National Congress (ANC).

The transparency of the process was supposed to ensure that the person appointed to this critical institution held no political bias.

By all accounts, her appointment suggested that Ms Mkhwebane had passed the test.

Her candidacy was endorsed with an overwhelming 263 votes during a debate in the 400-member National Assembly on 7 September, 2016.

Seventy-nine MPs voted against it and one abstained.

Only the official opposition, the Democratic Alliance (DA), was against her nomination, accusing her of being a spy and on the state security agency’s payroll – allegations she denies.

To be fair, the previous Public Protector Thuli Madonsela also faced spy accusations. Loyalists of former President Jacob Zuma claimed she was a CIA agent when she investigated him over the misuse of state funds, but more on that later.

Neither of the claims against the two women have been substantiated.

Where has it gone wrong?

The DA asked Ms Mkhwebane to investigate President Ramaphosa over concerns that he had an “improper relationship” with a controversial local company called Bosasa.

The latest of Ms Mkhwebane’s reports has found that President Cyril Ramaphosa deliberately misled parliament about a donation to his election campaign as party president in 2017.

It later emerged that he had indeed received the donation, but the president said he had been misinformed and apologised, seemingly brushing the issue aside.

Ms Mkhwebane’s findings on 19 July suggest this wasn’t merely an oversight but a deliberate lie by Mr Ramaphosa and say he should be held accountable for this.

Mr Ramaphosa has come out fighting; he not only describes her report as “fundamentally flawed” and wrong in law but wants a judicial review into the matter.

The political and public reaction to Ms Mkhwebane’s findings has been divided.

Surely taking on those in power is the sort of thing that would be celebrated in a budding democracy, so why is this not the case with Ms Mkhwebane?

Chiefly, it is fuelled by accusations from some members of the ANC that she is part of a campaign to discredit Mr Ramaphosa and undermine efforts to root out corruption within the party.

They believe she is loyal to the Zuma faction, which remains influential even after Mr Ramaphosa replaced him as party head in 2017, and is using her powers to settle political scores. There has been no evidence of this but it has done enough to taint public perception of her.

Ms Mkhwebane has claimed that her office is under attack by people who do not want to be held accountable for their actions.

These are uncertain times in South Africa – even with a new president, the ANC is a divided house.

The factionalism within the ruling party has permeations across all sectors of society.

Within the former liberation movement it has created mistrust and paranoia, which distracts from the real business of rebuilding South Africa.

Ms Mkhwebane’s supporters say she is simply the collateral damage of that infighting.

In her defence, she inherited a legacy she did not plan for. She took over from former corruption buster Ms Madonsela whose findings forced former Mr Zuma to pay back millions of rands of taxpayers’ money for unduly benefitting from upgrades to his rural home in Nkandla in KwaZulu-Natal province.

The so-called “Pay Back the Money” campaign, which was one of Mr Zuma’s many headaches, came after Ms Madonsela’s damning findings.

So perhaps the public and politicians alike were always going to be hard on Ms Mkhwebane, comparing her to her predecessor, who still enjoys a reputation of being impartial, fearless and fair during her seven-year tenure.

And rightly so, this is an important institution.

Findings by the public protector are legally binding here and not mere suggestions, as the previous administration had been treating them.

So having an adverse ruling from this office is a serious matter.

What does the future hold for Ms Mkhwebane?

Many are keeping an eye on not only which cases Ms Mkhwebane gives attention to, but also their outcome.

This is a woman who is not only well-versed in the laws of the country but also in its application.

But her critics have accused her of overstepping the bounds of her mandate, in some cases trying to change existing laws to suit her findings and white-washing investigations linked to those loyal to Mr Zuma.

None of it bodes well for the integrity of her office.

Ms Mkhwebane is not one to shy away from a fight or accept defeat, not even from the courts it seems.

She is determined to clear her name and hopefully restore the public’s faith in her as their protector.