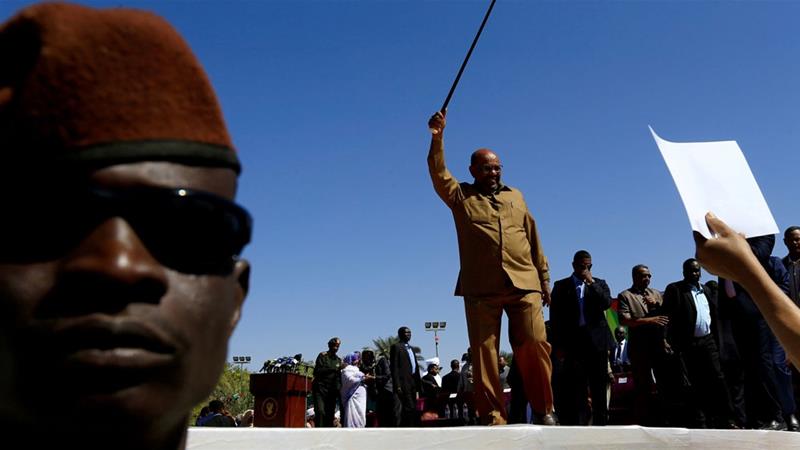 The Sudanese army has said it will not allow the state to collapse following weeks of mass protests demanding an end to President Omar al-Bashir’s near 30-year rule.

Some activists had been calling for the military to back the protesters and pressure the government to step down.

“The armed forces will not allow the Sudanese state to fall or to slide into the unknown,” said General Kamal Abdul Maarouf, chief of staff of the armed forces, in a statement on Wednesday.

He said those leading the protests were hostile to Sudan and were hurting the country’s image.

Addressing soldiers this month, al-Bashir, a 75-year-old former paratrooper who seized power in a bloodless coup in 1989, said he would only move aside for another army officer, or at the ballot box.

The protests were triggered by price increases and cash shortages but quickly developed into demonstrations against al-Bashir.

On Wednesday, security forces briefly detained the daughter of Sudanese opposition leader Sadiq al-Mahdi, her family said, as authorities continued to press ahead with the crackdown on protesters.

Two security vehicles belonging to the country’s powerful National Intelligence and Security Service (NISS) turned up at the residence of Mariam Sadiq al-Mahdi a day after the agency’s chief ordered the release of all detainees held during recent demonstrations.

“I now can confirm that my sister has been released. She had been taken to the headquarters of NISS for questioning,” her sister Rabah Sadiq al-Mahdi told AFP news agency.

Mariam is deputy head of the opposition Umma Party, headed by her father who is Sudan’s last democratically elected prime minister and was overthrown by al-Bashir in a coup in 1989.

Late on Tuesday, 186 protesters were released from detention hours after intelligence chief Salah Gosh “issued an order to release all detainees held in recent incidents”.

Rights groups say NISS arrested more than 1,000 people, including protesters, opposition leaders, activists and journalists, as part of its clampdown.

Officials say 30 people have died in violence during the protests, but human rights groups have put the death toll at more than 40.

After nearly a year in exile, Sadiq al-Mahdi returned to Sudan on December 19, the same day as the wave of protests erupted against the government.

“This regime has to go immediately,” al-Mahdi told hundreds of worshippers at a mosque in Omdurman after weekly prayers last Friday.

During al-Bashir’s visit to Cairo on Sunday, where he met Egypt’s President Abdel Fattah el-Sisi, the Sudanese leader said the unrest in his country was “an attempt to copy the so-called Arab Spring for Sudan”.

El-Sisi said he was eager to maintain the close historical ties between the two countries, while al-Bashir said the protests against him were not as bad as they seemed, accusing outside groups of trying to undermine his rule in what he compared with Egypt’s own experience during its 2011 uprising.

“There are many negative organisations working on shaking the stability and security of the region,” al-Bashir said at a joint press conference after the meeting.

“We acknowledge that there is a problem, we are not claiming there is nothing but it is not as big as described by some media platforms. It’s an attempt to copy the so-called ‘Arab Spring’ for Sudan.”