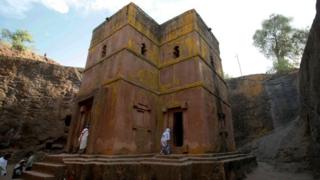 Ethiopian church groups have called on the government to block a planned visit to the country by a US-based company that organises tours for gay people.

The groups were particularly angry that the itinerary published by the Toto Tours company includes religious sites.

Many Ethiopians are deeply religious and disapprove of homosexuality, which is also prohibited under the law.

The owner of Toto Tours told the BBC the company had received threats and hate messages on social media.

“We are humble and loving people, we come with no harm in mind, nothing we do is going to harm anybody, and yet we are being threatened with harm,” Dan Ware told the BBC Amharic service.

Mr Ware said he was afraid, and urged the Ethiopian tourism ministry “to be careful”.

“The eyes of the world will be on us when we come and whatever is done to us will reflect tremendously on the Ethiopian culture and its tourism industry.”

The Toto Tours website says it is planning a trip to Ethiopia in October this year. The itinerary includes Bahir Dar, a centre of Christian mysticism, as well as Lalibela, famed for its ancient churches carved out of rock.

Both destinations are in the Amhara region of northern Ethiopia.

Not designed ‘to spread out beliefs’

The president of Selestu Me’et, a coalition of Ethiopian Orthodox church associations, told BBC Amharic that the government “should ban this group from entering the country and visiting the sacred sites”.

“They should not be allowed to leave their mark,” Dereje Negash said. “Our religion condemns this act, and it’s disgraceful.”

He emphasised that homosexuality was illegal in Ethiopia, and said the tour company should not be allowed to “violate the law of the land”.

Mr Negash is also a deacon of the Ethiopian Orthodox church, and has been lobbying against homosexuality in the country.

The call for the government to ban the tour was reportedly echoed by the Inter-Religious Council of Ethiopia, which includes Christian and Islamic denominations.

“Tour programmes and dating programmes that try to use our historical sites and heritage should be immediately stopped by the Ethiopian government,” Tagay Tadele, a Council official, told AFP news agency.

Consensual homosexual acts can be punished by up to 15 years in jail under Article 629 of the Ethiopian Criminal Code. It is unclear if Toto Tours would be violating Ethiopian law by merely visiting the country.

Bahiru Sheway, the co-founder of House of Guramayle, a London-based organisation that advocates for the recognition of LGBT rights in Ethiopia, told the BBC that homophobia had deep roots in the country.

Most gay Ethiopians did not reveal their sexuality, he said, for fear of physical harm and ostracism.

He added that the row over Toto Tours had triggered a social-media storm, with many Ethiopians expressing outrage at the prospect of gay tourists visiting the country – and even calling for attacks against them and their straight allies.

Mr Ware told the BBC that Toto Tours was not designed to spread “our beliefs or our way of life”.

“We are designed simply to allow people with similar affinities to travel together and to enjoy the wonders of the world and to appreciate them.”

He said the outcry over the planned Ethiopia trip was unprecedented in the company’s history. Toto Tours describes itself on its website as having served the LGBT community since 1990.

According to the website, the company has also organised tours to Uganda and Tanzania – both African countries that criminalise homosexual activity.