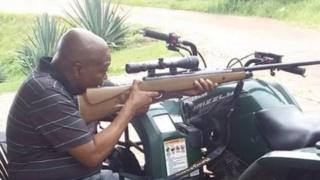 South Africa’s embattled former President Jacob Zuma has found himself at the centre of fresh controversy after tweeting a photo of himself taking aim with a rifle.

Its meaning was unambiguous, and provocative.

A day after he had learned that a judge had issued an arrest warrant for him for failing to appear in court on corruption charges related to a multi-million dollar arms deal, Mr Zuma tweeted a photograph, on his official account, showing him aiming a rifle at an unknown target.

For a man who uses social media only rarely, and apparently carefully, the implication was clear to all South Africans.

It was a display of angry defiance against a judiciary and an “elite” which – Mr Zuma and his supporters have argued for years – is biased against him and involved in a dark conspiracy to undermine him and the “radical economic transformation” agenda that he unveiled towards the end of his corruption-riddled presidency.

As the photograph provoked furious exchanges on social media, Mr Zuma’s family and his remaining allies in the governing African National Congress (ANC) have rallied to his defence.

His son Edward claimed the arrest warrant, issued by a judge but suspended until Mr Zuma’s next scheduled court appearance, had somehow been orchestrated by his political enemies.

Edward Zuma also said the rifle photo was two years old – a claim that hardly seemed relevant in the context in which it was used.

The head of the ANC’s Women’s League, Bathabile Dlamini, went further, speaking of “an invisible hand” orchestrating a campaign against the former president on behalf of “an evil white establishment”.

But many South Africans have reacted with contempt, and wry humour, to this latest incident, and see it as part of a decades-long attempt by Mr Zuma to avoid facing trial for alleged corruption by casting himself as a victim, floating frequent conspiracy theories and seeking endless court delays.

Aren't you supposed to be on your sick bed in some hospital somewhere in Cuba or Pretoria military?
Talk about a troll tweet of the decade 😂

The arrest warrant issued on Tuesday followed Mr Zuma’s failure to show up in court for a fraud and corruption case that dates back to the 1990s.

The former president’s lawyer produced a doctor’s “sick note” to explain his client’s absence, but the judge questioned the credibility of the document and warned that Mr Zuma would face arrest if he did not appear for his next court appearance in May.

Mr Zuma has repeatedly insisted that the corruption charges against him are part of a sophisticated western plot against him.

He has also claimed, with no evidence produced, that those same, unnamed enemies have sought to poison him. It is almost impossible not to see the “rifle” picture in that context.

But while Mr Zuma still enjoys some limited support in the ANC, and more generally in his home province of KwaZulu-Natal, his antics and conspiracy theories are increasingly seen by many as a sign of desperation.

South Africans have watched, for months, as senior officials have given damning evidence of corruption at a judge-led public inquiry into the Zuma presidency – an era which Mr Zuma’s successor, Cyril Ramaphosa, has since acknowledged was a period of rampant looting by state officials.

Mr Zuma’s behaviour is also seen here in the context of a “fight-back” by an allegedly corrupt faction within the ANC that lost control of the presidency and fears that, under a revived justice system, some of its most prominent members may soon join Mr Zuma in facing criminal charges.